What a Journalist Isn't

I'm sick and tired of the abuse journalists are getting at the moment. They don't deserve it, at least real journalists don't - ... 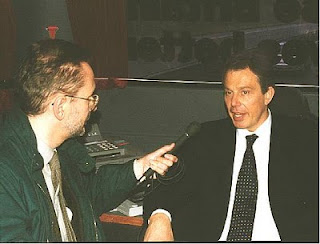 Got one decent cut, a comment on the coming Bradford Bulls v Salford Reds Rugby Superleague clash: "I hope everyone has a good time on Sunday, but I hope the red team wins next Thursday".

It did. There was euphoria (for a bit). Then there wasn't. 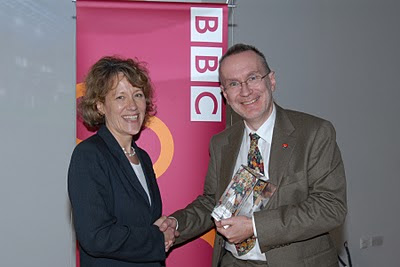 
Richard's Trainees among the best in the UK 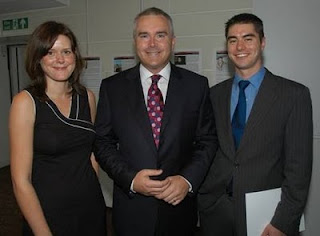 Postgrads Gail Champion (now with File on Four) and Matt Game (now working outside journalism) with newsreader Huw Edwards at a BBC reception early in 2005. Matt was one of the first on the scene of the bus blast in Russell Square later that year. The scheme itself became a casualty .. of BBC cutbacks. 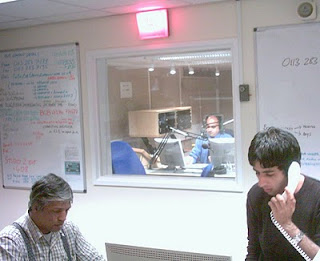 On 14 July 2005 every news organisation wanted to broadcast live from Leeds as police made a series of raids in connection with the 7/7 terror attacks in London. With no space at the BBC North building, the Asian Network had to find another base for its operations. As a result South Asia (India, Pakistan, Bengaladesh and Sri Lanka) found out about the Leeds link to the London bombings from the postgraduate studios at Leeds Trinity. 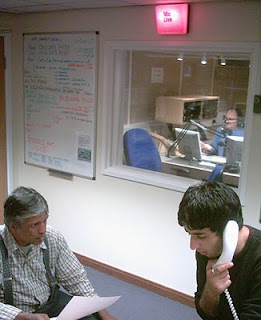 Are You Ready ... for the Real Radio Experience? 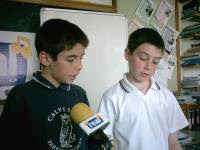 These activities included a classroom activity for Year 6 pupils ('The Real Radio Experience') in which pupils read news bulletins, weather and traffic reports, dedications and ads over a pre-recorded bed of jingles and music. (right)


There were also a series of evening 'masterclasses' for FE media students at Real's swanky Leeds headquarters . The first of these was launched by wireless legend Tony Blackburn (below) who told the students he'd not had more than four hours' sleep a night for forty years. And he certainly looked like he was telling the truth. 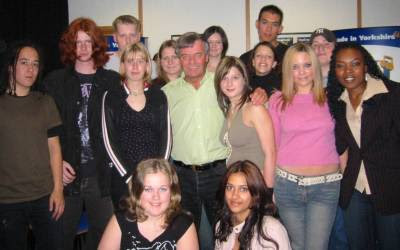 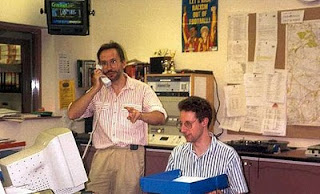 Richard in the newsroom at The Pulse, very proud of his pager in 1995. I liked that shirt. With me in the picture Nik Walshe, a Leeds Trinity graduate who went on the become news editor at Galaxy 106.6 FM before fleeing the country. He's now enjoying the good life in Canada where he's not a lumberjack but he's certainly OK with his wife and lovely daughter. 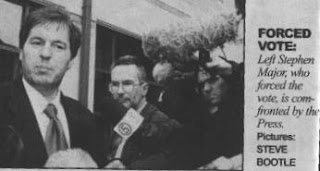 I love this picture (Thanks guys at the Bradford Telegraph and Argus). Leading the pack to comfront (sic) the guy who won the vote to force the privatisation of the Bradford & Bingley Building Society against the wishes of the board.

I'm a radio journalist and media skills trainer based in Leeds, Yorkshire, UK.

To discuss how we can work together, have a look at the Mediaskills tab, read the Comments others have made, then get in touch.

After spending my early working days as a producer and journalist at Pennine Radio I ended up as News Editor at the time the station evolved into The Pulse of West Yorkshire.

I'm also proud to have helped more than 400 broadcast journalists enter the profession over the past 23 years with the innovative Postgraduate course I helped establish at Leeds Trinity University. It was a particular honour to receive the BJTC's Special Recognition Award for services to Journalism and Broadcast Training in November 2017.

I'm also one of just three BBC 'Developing Talent' Achievement Award recipients. I've served on the Accreditation Board of the Broadcast Journalism Training Council and I've been a judge four times for the BBC Gillard Awards.